The Start of It All 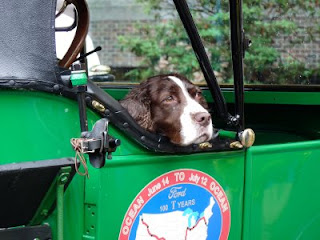 This pup crossed the country in a Model T Ford. In 1909 there was a race from New York to Seattle to the Alaska-Yukon-Pacific exposition. As part of the A-Y-P centenniel celebration, Model T owners duplicated, as much as possible, the 1909 route.

On Sunday July 12, 2009 they arrived at the former grounds of the exposition (now the University of Washington campus).

At least two cars were shipped to New York from England. Many of the teams blogged their way across country. http://oceantoocean.ning.com/

Rain poured down on the cars (and us) ringing Drumheller Fountain on Sunday. Walking around the fountain we tracked the change in style through the years. While it was fun to see the old cars, I was chilled to think of the changes they have wrought on our culture and environment.