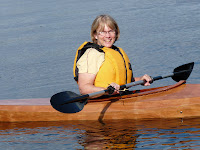 We had the great kayak launch. The day was predicted for rain so I was nervous. It took alot of texting and arranging to get five people together. Saturday afternoon was clear and sunny . We planned a wiennie roast for afterwards. I went to Central Market for the best hot dogs: Oregon Country natural beef. We packed up all the food and went off to Ballard.
I entered my boat building shed for the last time (it's really a garage that Jessamyn and Andy are glad to have all to themselves). I opened the garage doors all the way which attracted our neighbors to watch Micah and Roger carry the kayak from its birthplace to the cartop carrier. One neighbor suggested we sail together to Greece, her country of origin. With the kayak cinched on tight we caravaned over to Magnussen Park to the north shore boat launch.
I had planned on christening the boat but hadn't thought of a name, so just launched her with some champagne and wishes for fair winds and calm seas. This kayak is was tippier than my inflatable and there was some question as to whether there would be embarrasing pictures of me falling off into the water. I managed to climb in and push off well. It FLOATS!
I built this with my own two hands, just me, and it floats and doesn't leak. I was astounded. I wish my father had been there to see it. That I could build a boat, I still can't quite believe. It was so hard, many things went wrong. I wanted to give up and regretted starting the project.
I have always done things with my hands. I've built things before: boxes and framed and dry walled two studios, tiled two bathrooms and hung and mudded dry wall but nothing was like this. Most everybody tried out the kayak. Yes, I actually let them get in it. Then we roasted hotdogs and ate. It was a special day.
Posted by KJ Bateman at 7:49 PM