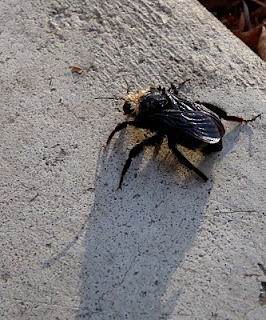 While having lunch with my friend Leah at Vios Cafe in Ravenna we talked about how warm it is this winter. She described early blooms in her neighborhood. When Mogs and I were heading out for our walk, we saw this lady on the porch; the first bumblebee of 2010.

Now, it has been mild since January but it is still pretty cool out. Her fur is all matted and her wings are tight on her back.  I put a drop of honey down but she ignored it. Notice that she is missing the tarsus of her hind leg.  I hope I didn't cause that. She almost walked into a spider's web and I used a stick to lift her away.

It rained steadily all day until late afternoon. Maybe her burrow flooded and she had to abandon it early. Or maybe it really is warm enough for bumblebees. I considered keeping her in an aquarium but decided not to since I don't have one with a tight lid. I hope she will be alright.
Posted by KJ Bateman at 6:18 PM

Email ThisBlogThis!Share to TwitterShare to FacebookShare to Pinterest
Labels: bumblebees