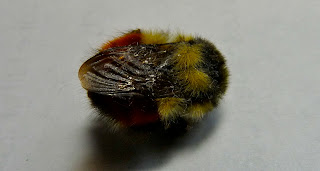 On February 2, I found the first bumble bee of 2011, twenty-six days earlier than last year. Looks cute doesn't it?  I turned it over and saw something terribly wrong. It had no face. At first I thought it was deformed with the head not fully developed and fused into the thorax. It appeared to have only one eye with the first foreleg right next to it.
After taking a closer look under a magnifying glass I saw that the head and one leg were were missing altogether. Something scooped its head off, taking the leg with it. This act of violence must have happened just before I found it; the legs were still moving. 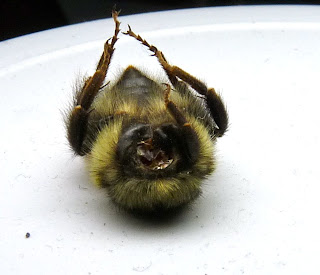 Email ThisBlogThis!Share to TwitterShare to FacebookShare to Pinterest
Labels: bumblebees