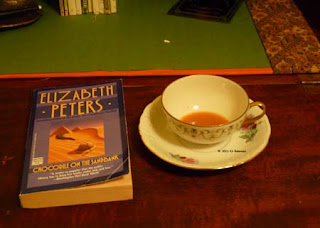 There are some books that I return to again and again because they are so good and comforting. These are the books you read when things are hard and you need to get away for awhile.

Amelia Peabody is a woman of a certain age who sets off for Eygpt in the waning days of the British Empire where she discovers love: of archeology and an archeologist. She is a modern woman with strong ideas who meets her match in Radcliffe Emerson, one of the best heros in any romance. Together they are present at the fabulous discoveries of the sites in The Valley of the Kings. They also seem to attract an unusual amount of dead bodies of the modern kind. The books both poke fun at and are wonderful examples of romantic mysteries

I started reading the Amelia Peabody series in the 1990s. I enjoyed the first ones but Amelia's attitude towards her offspring upset me. My own offspring were young at the time. In a de-cluttering moment I gave them all away (the books, not the offspring)

Then a new book came out and I loved it. I came to enjoy the snarky voice of the author. So I collected all the books again until one book upset me (I won't tell you which one) so much I threw it across the room and all the books in the series fell prey to another session of book purge.

When the next book in the series came out I bought it and wanted to read the series again. So I collected all the copies-again. I finally realized that this is one of those series I just had to keep because periodically I want to read them again, in order, from the beginning.

I have fond memories of reading the series one August at Magnusen Beach during a particularly tough year. I would swim a bit and then read in the hot summer sun.

I eagerly awaited each new book, one about every two years. I don't have to watch for new books anymore; I will have to be content re-reading the ones I have. Barbara Mertz (aka Elizabeth Peters) died August 8, 2013
Posted by KJ Bateman at 7:00 AM