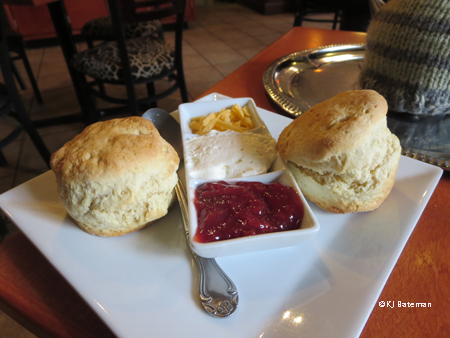 As pleasant as high tea at Queen Mary was, I found myself longing for a casual tea room where you didn't have to make a reservation. An everyday place.

Tea rooms were all the rage for a while. There aren't as many now. I guess their moment has passed.


I found the Cederberg Tea House on Queen Anne. A South African tea house. Hmm, that could be sort of British.

And it is. They have tea sandwiches and baked-to-order scones and tea in a pot. I ordered the scones. They were delicious, though I would classify them as American biscuits.  I expect scones to have a crunchier crust but keep in mind that would be American scones. I am no expert on English scones.

They also have rooibos and bunny chow. I'll pass on the rooibos, which is a tisane as Poirot would say, and not a tea. But I can't wait to try the bunny chow.
Posted by KJ Bateman at 8:00 AM