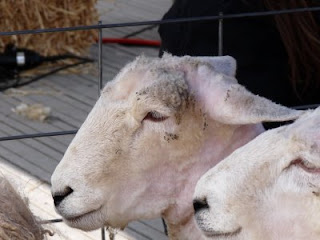 Kelsey Creek hosted a spring sheep shearing last Saturday. Parents and children crowded the road leading to the park. Cars snaked along the road to a park and ride where shuttle buses waited to whisk people back to the park. I found parking near the Bellevue Botanical Garden and strolled through a different park back to Kelsey Creek.

The sheep were surpisingly accepting of being wrestled about and shorn of their fleece. Maybe it's like cutting your hair very short after wearing it long. There is a wonderful sense of lightness, freedom and possibility.

In one of the barns people demonstrated spinning and dyeing. A woman at a spinning wheel said it took her 2 hours to learn to spin and she has been doing it for 8 years. She wore a beautiful sweater. She washed the fleece, carded it, spun it into yarn and then knitted the sweater.

I had a vision or dream that I had a spinning and weaving studio. It was steps from my house on a cliff near the sea. The building were surrounded by waving wheat-colored grass. Steps led down into the studio and the walls were lined with shelves full of yarn in the most vibrant colors.

I think about learning to spin and weave from time to time.