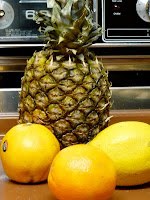 It's time to candy fruit for fruitcake. I used to buy Family Circle and Good Housekeeping magazines Holiday issues. They were full of recipes and crafts. In 1976 they published a fruitcake recipe with home candied fruit. I've been making it ever since.  My list has shrunk and I only need to bake one batch now.

A few years ago I discovered those little paper baking pans. It's so much easier than greasing and cutting out wax paper for the bread tins. The only place where I have found the right size is Sur la Table in the Pike Place Market.  If you don't get there early enough they are sold out. This year I went just after Halloween and they had tons. The clerk told me someone had just bought 30 of them.

The citrus on the right is a lemon. I bought two and one molded in two days. I haven't seen lemons that big since I lived in California (pause for a little sigh of longing for places where lemons grow).
Posted by KJ Bateman at 2:46 PM