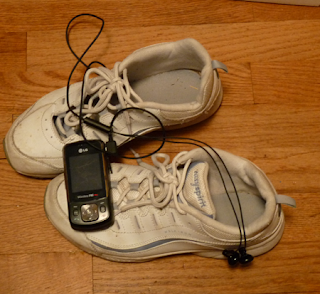 I like to run. I can't believe I wrote that, let alone that I think it. Not so long ago (like 2011) when I did the first triathlon I spent a lot of posts whining, er, commenting about how hard and unpleasant I found running. Biking and swimming, yes, bring on the miles but one minute of running and I wanted to fall to the ground moaning.

For 2012  I ran 2 minutes at a time interspersed with walking. This year I bumped it up to 5 minute run segments. Even so, somehow my run time was slower than 2012.

But during the summer as I increased the minutes, I began to look forward to running. Something magic? Getting in better shape? No, it is the power of music. I trained with the radio and ear phones last year. It got so if I was out at a restaurant or store and a song wafted over the air, I wanted to run.

I've kept it up post race. Not only can I  run three 10 minute segments, but I have a good working knowledge of current pop songs. I give that song a 10, Dick. It's easy to run to.
Posted by KJ Bateman at 8:45 PM