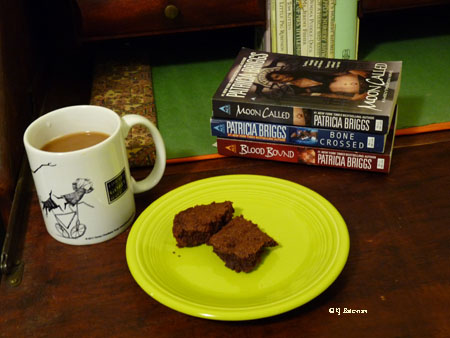 I am late to the urban fantasy genre. I discovered it with Aaronvich's fabulous series  but haven't delved much further. Because I had several plane flights last summer, I was looking for something fast-paced and intense. The kind of book I don't normally read at home because it's too violent or disturbing-perfect for creating the illusion I am not really stuck on a plane for x number of hours.

I took a library book to Guam but didn't read it until the return trip. I was actually sorry the leg from Guam to Japan was not longer because I wanted to finish the book. What was the book? Magic Rises by Ilona Andrews. This is the first in a series about Kate Daniels.

When I got home, I checked out the first book in the series but I couldn't read it. The action was too intense for bedtime reading. Fortunately, I had another trip, this one to Florida. Land of hurricanes and Zika. An intense book was required to override my anxiety.

I read Magic Bites on the plane but found myself alone in my hotel still pretty anxious by the tasks ahead of me. Off to the Barnes and Noble. I love Barnes and Noble in Fort Lauderdale. They have been my rock over the past several years. They are open until 10 pm.

I bought the next Kate Daniels book and read the blurbs. One recommendation said "if you liked this book try Patricia Briggs." So I did. I bought book one, Moon Called. Read it in a day. Went back to B & N. Bought books two and three. Read them in two days. My goodness, these books are addicting.

Kate was raised to be a killer by her foster father. She very efficient. But he did something wrong because she also has a strong moral compass. Dystopian Atlanta, where magic has disrupted the regular world and there are different factions of magical creatures battling for turf. Kate works for the Mercenary Guild to fight the creatures who are out of control.

She runs afoul of the Beast Lord, leader of  the city's werecreatures. (weremongooses! or is it mongeese) Sparks fly. The romance takes several books to fully ripen. Talk about foreplay!

I love the snarky tone of the characters and the world Andrews has created.

Mercy is a werecoyote mechanic raised by werewolves. Bad things happen, Very, very bad things. Kate deals with them and her over-bearing neighbor who just happens to be leader of the local werewolf pack. Did I mention this was a romance as well?

I love Kate's voice and world view. The books are bloody, be prepared, but fast-paced and the characters are endearing. As with the Kate Daniels books, the romance develops slowly over several books.